Hello everyone, a new 6mans season has come, and we are beyond excited to show you what we have in store for you.
This blog post is going to be a tiny bit long, so brace yourselves and let's start.

This blog post is particularily important for B and B+ players, so make sure to read the full announcement.

This might come as a surprise to many, but it's a feature we've been thinking about for a long time now.

The competitive integrity of 6mans has always been our first priority.

By introducing this feature, which we will be trailing for the first few weeks and monitoring feedback on, we hope to make the matchmaking of 6mans more similar to that of
other PUG systems in other games (eg. ESEA), where queues are anonymous and players find out who they queued into only when a queue pops

How to queue anonymously?

To queue anonymously simply queue by sending the bot "!q" or "!leave" in direct messages, instead of using your rank chat.
You will be added to the queue automatically, and this will show in the rank channel:

• Keep in mind: This feature is still a trial! We will be closely monitoring feedback and deciding whether to keep it or not!
• Additionally: This will not replace the normal queueing mechanism! You can still queue by typing !q in your respective rank channel.

Modmail is a feature many servers have, which we now implemented into our own bot as well.

Often times, moderators are busy and cannot immediately reply to DMs. With modmail, you can contact them with the certainty you will be getting an answer.

Your messages will get sent in a special channel where different members of our staff will be able to assist you, making sure you will be getting an answer to your query

How to use modmail?

To use modmail, simply DM the bot with !mm followed by your message.

The bot will give you a confirmation the message is sent, and you're set! 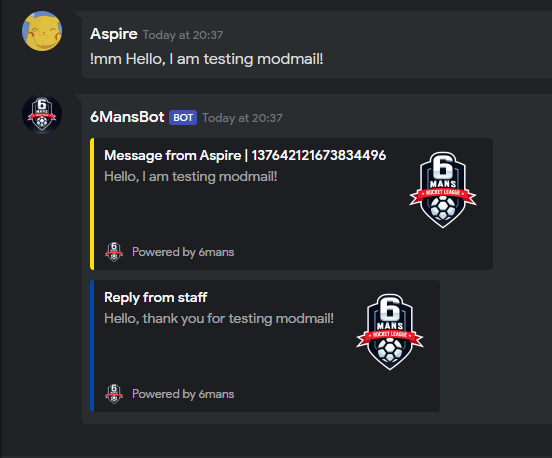 Bot now shows captains, as well as the person who should create the lobby.

You can now spectate lobbies provided you receive consent from everyone in the lobby.

You can request for consent easily by using the command !request_spectate followed by the lobby ID.

Once you receive the required votes, the bot will notify you that you have been allowed to spectate the lobby!

We have rewritten our rulebook, in order for it to reflect more situations as well as clarify things that were left in a "gray area" before.

You can check out the rewritten rules in our #rules_guidelines channel in Discord!

The leaderboard reset for this month is a hard reset.

For the current month, we have deemed this necessary due to all the changes made to the system.

We apologize for the inconvenience and we will try to not hard reset as often from now on.

We've heard your concern about Rank B+ being not up to par with what it originally intended to be, and how the quality of the queues has decreased overtime.
Due to this we have decided to do a purge of the rank via a feedback group + record over the past 3 months in the rank.

This purge has been handled very discretely by our staff members, and you will see the outcome of it soon after this announcement is released.

We hope the quality of queues in the ranks will increase as a result of it, and we will be keeping tabs on the rank and feedback from its remaining members.

Additionally: B+ will now have a game quota of 25 games in 2 months.

If you fail to meet the quota, you will be demoted to Rank B.

There have been a lot of complaints lately about the level of Rank B as well, which is why we are forcing a rank check for every current Rank B member.

Adding to that, the MMR required to get into Rank B will be 1625 (meaning users who are GC but below the MMR will be placed in Rank C).

This MMR is subject to change based on the current Rocket League season start time (meaning it will be higher towards the end of a season and lower at the start) and / or based on feedback from our community.

We will be monitoring the queues in Rank C to see if this change is too much for the rank to handle and, if need be, will act on that.